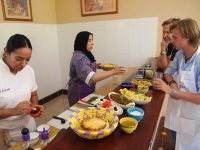 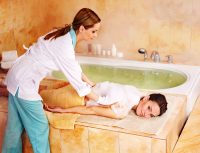 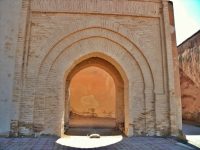 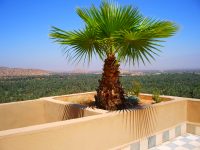 The city of Taroudant belongs to the province of Taroudant, located in the Souss region of Morocco, and is considered one of the most ancient cities in the country’s history, and its foundation dates back to the third century BC. The city also bears the name of its founder, the Berber Princess Taroudant, and it is noteworthy that the city enjoyed great importance during the period from Almoravid to Almohad.

The beginning of the fifteenth century is considered a miserable period for the country, as it lived in a state of desolation and deterioration, and this negatively affected its general situation. It became a secondary center, and by the sixteenth century it was able to restore its economic situation thanks to the advent of the Saadians who added touch to its economy It flourished again, and Muhammad al-Sheikh contributed greatly to the renaissance of the city again.

The city witnessed the construction of walls, the construction of the Great Mosque, the Kasbah, and the school, and the establishment of sugar factories. The city reverted to its weakness in conjunction with the weakness of the Alawite state, and the matter worsened after the death of Mawla Ismail. This Taroudant excursion from Taghazout can be made as a private tour (this tour is a shared group offer) Please don’t hesitate to contact us if you wish to go on a private tour to Taroudant from Taghazout

Statistics in 2004 indicate that the population of the city has reached 69,489, and the city includes a number of ethnic groups, and the city is considered one of the poor cities due to the fact that the vast majority of its residents have limited income by virtue of their work in agriculture and factories, and thus the city is characterized by modesty.

The continental climate affects the city, where its winters are cold and temperatures are very low. The city records an average annual rainfall of between 200-400 mm, and its summer is relatively hot as the temperature rises to more than 40 degrees Celsius.

The city includes a number of existing historical monuments that narrate its ancient history, and the events that took place on its land in the past centuries, namely:

Mosques: Among the most important of these mosques are the Kasbah, the Kharazine, the Firqat al-Ahbab, and the Great Mosque.

The city of Taroudant is one of the ancient cities, in addition to being a tourist attraction throughout history because it is a quiet place devoid of the noise of cities. The city offers a number of quality hotel services to its tourists, and the most influx of people are the French, then the Germans, and the Italians.

Over the long years, our ancestors excelled in drawing the landmarks of ancient cities and a lofty civilization that is unparalleled in the world. They are also fully aware of the meaning of sustainable development, for which they have taken the slogan “They sowed and we ate, and we sowed and they ate.”

Therefore, when you bid farewell to the big cities that were crawled by the cement, Moroccan villages welcome you with their picturesque landscapes and attractive archaeological sites, despite the fact that some of them are still unknown due to the lack of tourism promotion of the cultural and civilizational heritage, whether through the organization of international cultural activities that attract participants from all sides. Or encourage civil society associations specialized in valuing heritage, or by putting up billboards that entice tourists to visit them.

The south of Morocco is one of the regions that abound with distinct tourist sites. Sites that a Moroccan must first know, research their history, enjoy their geography, inhale their gentle breeze, and drink from their gentle springs.

The oasis of “Tiout” (with the breaking of the ta and the tightening of the ya and its annexation, and the housing of the last ta) is considered relative to the hump of the camel due to its convex height at the foot of the mountain in the middle of several heights and is one of the tourist sites hidden behind the slopes of the Anti-Atlas. It is located about 30 km southeast of the city of Taroudant via the Igram-Tata regional road, and it is inhabited by an active population of more than 3000 people, in which the youth group has the lion’s share.

The charm of the Tiout Oasis lies in the diversity of its natural resources that combine the argan forest and the palm oasis, the fresh flowing water, and its cultural and architectural heritage that bears witness to the history of the Saadian state, which is rich in epics and heroics.

The oases of Tiout have been famous throughout the ages for being a favorite village for the princes of the Saadian state, who studied there, especially Muhammad Sheikh al-Saadi. The area includes four well-known Sufi zawiyas, distributed among the Jeshtamites, Nasiriyah, Tijaniyah, and Darqawi.

“Tiot” includes a commercial and industrial center famous for the cultivation of sugar cane, which was used at the time in the production of sugar molds in several factories whose ruins are still steadfast in the face of the ravages of time and humans, in addition to being known for the presence of abundant water springs that are still, to this day, abundant in their waters on The area had gone through a phase of depletion due to attraction. Then the leader “Mohammed bin Ibrahim Al-Tiouti” revived it during the protection period, provided it with irrigation channels and engines, and built huge tanks to collect its water in order to organize irrigation and agriculture operations.

In the agricultural field, the region was historically distinguished by its lush trees that spread in its various plain areas, and its people modernized traditional methods to exploit its abundantly flowing throughput in setting up water-powered grain mills called in Berber “Ezrkan Nawaman”, and it consists of a wooden fan “chaf” and a millstone made of stone “Azark”, They are traditional mills that are not affected much by the factors of time, as much as they are affected by human neglect. Of the dozens of water mills, only one is left, which is constantly being restored.

In the aspect related to customs and traditions, the region was known for its traditional dress and the “shooting” season, which was an opportunity to train the region’s youth in archery and martial arts, as well as an opportunity to create a competitive atmosphere among the people of the areas surrounding the center of the “Tiout” group, especially in the arts of Ahwash and Dakka Al-Hawaria The area was also famous for organizing a series of religious rituals, such as “Tiult n al-Talba” and “Esaween”.

In addition, the area was known to be stable for Moroccan Jews, especially in the Mellah and in an area called “du Wudin” which means “the slum of the Jewish Quarter.” Shmaiha,” a Jewish shrine from ancient times until today.

Despite receiving a significant number of foreign tourists, and despite the efforts made by the local community to upgrade the area and restore its consideration, it remains one of the areas that suffer from both issues as much as it suffers from the futility of studies carried out on the area by many intervening parties. Studies exhausted the region and plunged its inhabitants into a cycle of waiting for promises to be fulfilled and for the needs of a population suffering from poverty, lack of income-generating projects, and high unemployment.

Rehabilitation of the jewel of Sous will be through encouraging domestic tourism, encouraging development projects and cultural activities adopted by active associations in civil society in the horizon of creating dynamism in the rural community and making it more capable of innovation, creativity, and continuity in giving. The Tiout Oasis is a cradle for scholars and memorizers of the Qur’an. It is an inexhaustible reservoir of talents that are waiting to be discovered and taken by the hand. It is also fertile land for agricultural development projects as it was known before, as the land produces a large amount of wheat, barley, and other grains and vegetables, in addition to the sugar cane that grows in abundance.