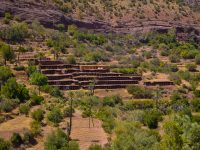 Inzerki Trip From Agadir is The Inzerki apiary, the world’s biggest traditional apiary and probably the oldest, is a gem of Berber history. It has, nevertheless, remained a top-secret vacation spot. The current configuration comes from the mid-nineteenth century. Inzerki‘s “taddart,” made of earth, stone, and wood, was nearly totally demolished in the 1990s. It was rebuilt in 2005 and currently only has a few active beehives among the hundreds of traps it holds. apply make-up The guardian, Brahim, will greet you there.

The Zolado hostel is an ideal base, facing the national road, and is built on the same-named rock, from which one can enjoy a panoramic view surrounding the Abdelmoumen dam’s lake. You may dine there at any time of day, including midday and nighttime. However, there is a shortcut. It is essential to exit the national road a short distance farther, at Argana, without a sign indicating the direction of Inzerki, and then to follow the route that runs beneath the highway.

The track is quite smooth, but Google Maps does not recognize it, which explains Tazarine’s path. A 4 × 4 is not required unless it has rained in the preceding days, causing the Atlas soil to become soft and hazardous. Nonetheless, caution is advised. The place is marked by a rusted sign after 10 kilometers. Whatever path we take, the scenery is breathtaking rich red dirt, lush greenery, traditional douars, and magnificent djebels. When you arrive, park your car underneath the road. Brahim Chtoui, the caretaker’s residence, is a few hundred meters distant. It’s a good idea to let them know you’ll be visiting before you go.

High-quality honey that’s hard to get by.

Brahim is pleased to share information about the region’s history, apiary operations, and flora and flowers.A sizable population of Berber beekeepers has been nomadically practicing beekeeping from time immemorial. The hives were relocated in response to blooms, droughts, and altitude to make them more favorable to beekeeping. As a result, the harvest quantity was enhanced.

What Is Involved in the Cost?

Hotel pick-up and drop off in Agadir
Air-Conditioned Transportation
All taxes and fees are included in the price.

The fact that these beekeepers gathered each year in the same spot prompted them to assemble their hives and establish a permanent location. We can draw a comparison between these community apiaries and the Agadir (plural: igoudar), which can be found in abundance throughout the Atlas and neighboring Anti-Atlas, such as those of Imchguiguiln and Ikounka or Amasa. Those guarded shared hydroponic farms were designed to safeguard Berber communities, their crops, small animals, and even bees against raids by neighboring tribes and robbers.

Around 80 families lived in huts in Inzerki, each split into four equal-sized levels with a little bigger open area above. The area below and above is utilized for rainfall drainage and ventilation. The swarm of bees is housed in a beehive made of woven reed or bark in the shape of a long cylinder. A plate of carved palm bark with seeing where belonging to each owner is used to plug the ends. Insects may enter and escape through a tiny opening.

Only one of these tubes is spaced on each floor, yielding three honeybees per cube. Once the tube is full of honey, the beekeeper opens the front and completely closes the cell, creating a fresh area for the bees to build their combs. Mud or dried cow dung is used to seal the cylinders and the cell. Every household had a number of huts. Inzerki had over 3,000 beehives when the activity was at its peak.

Time to be picked up from your hotel ​​

A separate apiary, to the west and 400 meters distant from the main apiary, has around fifty compartments with enough space for 600 hives. If each hive had 40,000 to 50,000 bees, we get a residential area of 120 to 150 million bees working in this massive apiary, which must have created an audible roaring from several kilometers distant. !

The Inzerki treasure was unfortunately destroyed by severe floods in 1990 and 1996. A large number of huts have fallen. The location was decommissioned in favor of contemporary beehives that could be easily relocated if necessary. With the help of USAID (United States Agency for International Promotion), the Inzerki apiary was rebuilt in 2006 as part of the development of rural tourism. It had been repaired in 1980 with the assistance of a French organization, and again in 1996 with Unesco’s assistance. Despite these efforts, the apiary has failed to restore its previous level of activity.

When is it going to be available?

Unfortunately, the renovated structures do not match the original model. Cedar was utilized at the time, which was known for its resilience and imperviousness but was also costly. The renovations were performed using eucalyptus, which is a considerably less efficient material. It’s also tough to get rid of rainwater. The developer who completed the construction was simply unqualified in historical beekeeping.

Today, the apiary is used by just eight households. The Taddart Inzerki Association plans to begin a campaign to repair the apiary as soon as funds become available. The custodian provides mint tea, honey tastings, and amlou, the Berber equivalent of Nutella. He would prefer that more people come, so that he may sell them honey and inform them about the site’s sustainability. Before you go, don’t forget about Hassan and his group!

The excursion is available in

Honey is sometimes the sole source of income for local people, which is why they formed a cooperative to monitor and control the essential resource passed down from their forefathers. The Honey Festival takes place every year in Imouzzer at the beginning of July. This pleasant gathering of locals and visitors is meant to highlight the region’s potential.