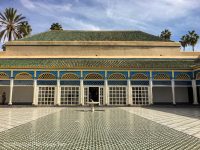 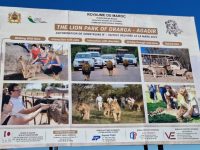 An “Agadir Lion Park” should soon see the light of day in Agadir. Located at the exit of Agadir in the commune of Drarga, the project whose prime contractor is the company Aquila Morocco based in Marrakech was launched by Hakim Abdel Hafid, a Moroccan who has acquired a lot of experience in this type of park in South Africa.

Safari parks have proliferated in North America and Europe. Generally, it is a very large place, which presents animals in semi-freedom, to give visitors the impression that one feels in the great African parks in South Africa, Kenya or Tanzania. . These parks give visitors the privilege of rubbing shoulders in a vehicle with large preserved wildlife, elephants, lions, giraffes…

Morocco should also soon see its first park of its kind open its doors in Agadir. Behind this unprecedented project in the Kingdom, is a Moroccan, Hakim Abdel Hafid, who has experience with this type of park in South Africa. Indeed, the latter, a biologist by training, has worked for a long time in this country as responsible for the breeding of lions in two reserves.

This Moroccan who became the owner of a private park in South Africa decided to share his experience with his country. Better still, Hakim Abdel Hafid, intends to bring, through this project where he is the managing partner, an added value to the Moroccan tourist offer. Baptized “The Lion Park of Drarga”, the project is located in the town of Drarga, the same one that hosts Croco Parc opened in 2015. It would thus complete the offer already proposed by this animal park. Construction work on the park began a month ago.

This is not the first time that a Safari Park project has been announced in Agadir in the municipality of Drarga. In September 2016, the authorities approved a Parc Safari project. This project has been abandoned. It is also on this same site that the Drarga Lion Park is being deployed. It is a forest land of 20 hectares. While the “Safari Parc” project initially provided for other sports activities on this site such as mini-golf, archery, petanque, or tennis, “The Lion Park of Drarga” in Aquila Morocco has, on the other hand, only positioned on the observation of lions.

Located at the exit of Agadir, the site is exactly on the northern edge of the express road which leads to the Marrakech motorway. Of the 20 hectares, only a little less than a quarter of the area will be occupied by facilities: a restaurant, toilets for passing visitors, a mosque, and around twenty ecolodges backed by a swimming pool intended for people wishing to extend their visits. A care area is also provided for animals. The rest of the site will be laid out in three zones: the first will be dedicated to visitors to observe African lions, the second for white lions, and the third zone reserved for Barbary lions.

Construction work on the park, for which the building permit was issued on March 14, 2021, began a month ago.
In addition to planting new shrubs, Aquila Morocco plans to integrate all the argan trees within the perimeter into the site. It must be said that the lions will not be confined to cramped spaces, like in a zoo: they will circulate freely throughout this space. In the first phase, the Drarga Lion Park will host 45 lions from the South African reserve of Hakim Abdel Hafid. 20 more will be added later.

It is an immersive experience equivalent to an African reserve visit that Aquila Morocco intends to offer visitors. The latter will be able to observe the lions while traveling with their cars. Thus, the project leaders do not intend to trifle with safety rules, ecology or the treatment of animals. On the safety side, for example, drivers will have to close their windows and never get out of their car. Moreover, the promoters of the project are planning special vehicles for non-motorized people. No less than 45 people will be employed full-time by “The Lion Park of Drarga”.